Generic Safety Surveillance, Pharmacovigilance and Labeling Consulting Could Be More Relevant Now than Ever 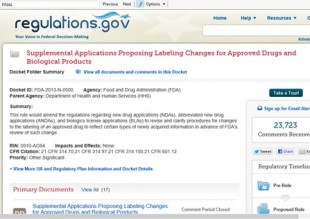 PDG™ is comprised of pharmaceutical consultants who devote considerable resources to brand and generic post-marketing safety surveillance, pharmacovigilance and labeling supplements. On August 29, 2011, Public Citizen filed a Citizen Petition calling for FDA to authorize ANDA holders to change approved generic labeling using the Changes Being Effected (CBE) and Prior-Approval Supplement (PAS) procedures (among other changes).[1] In response, on November 13, 2013, FDA issued notice of a proposed rule entitled “Supplemental Applications Proposing Labeling Changes for Approved Drugs and Biological Products”. Having an experienced team of generic drug consultants, PDG has reported extensively on events surrounding this proposal, which we refer to as the Generic CBE Rule. Click here for a paper containing a complete chronology of events.

The issues at hand
If the proposed rule is finalized as originally proposed, and ANDA holders are permitted to update safety related product labeling by submitting a Change Being Effected, CBE-0, supplement to FDA,[2] the result would be temporary differences between the labels of brand name reference listed drugs (RLDs) and their generic counterparts. However, in November 2014 GPhA and PhRMA put forth an alternative to the Generic CBE Rule. Known as the Expedited Agency Review (EAR), EAR would require NDA/ANDA holders to submit new safety information to FDA. FDA would then review the information in light of information in its Sentinel System and require changes based on the review. Quite a departure from the CBE, the proposal described the EAR as replacing the changes being effected process for safety related labeling changes now permitted under 21 CFR. Section 314.70(c)(6).

Not everyone favors the changes
Not surprisingly, after receipt of the EAR proposal and reopening of the comment period, FDA received a great deal of input from a variety of stakeholders. Between the time of the original announcement in November 2013 and the closing of the first comment period in March 2014, PDG reported that FDA had received 64 submissions. Since reopening the comment period in February 2015, over 23,000 additional comments have been received.[3]

Many of the comments received by FDA have expressed opposition to the proposal, citing violation of Hatch-Waxman as a consequence of dissemination of labeling different from that of the RLD and exposure of generic manufacturers to “billions of dollars in new legal liabilities”.[4]

The concern about legal liability is based on court precedent (Wyeth v. Levine; Pliva v. Mensing). In these decisions, the courts have held, generally, that while branded drug sponsors may be subject to product liability action for failure to warn, generic manufacturers are not. This is known as preemption. Therefore, whether a party is entitled to bring forth a legal action largely depends on whether the individual was prescribed and/or received a branded drug or a generic drug (preempted). If FDA’s proposed rule is finalized, the preemption of failure to warn claims regarding generic drugs will be open to question.[5]

The silver lining – according to FDA
FDA’s view is that the proposed rule “would speed the dissemination of new safety information about generic drugs to health professionals and patients by allowing generic drug makers to use the same process as brand drug manufacturers to update safety information in the product labeling.”[6]

Over 80 percent of drugs dispensed in today’s marketplace are produced by a generic manufacturer. Further, it is not unusual for brand-name manufacturers to stop production of RLDs after generic versions are approved and launched. Because of these and other factors, FDA asserts that the time has come to allow generic drug application holders the ability to update the generic labeling to reflect new safety information that has been obtained through post-marketing surveillance, even if temporary labeling differences between the brand drug and the generic drug are the result.[8] For those generic manufacturers needing to augment the expertise of their regulatory, safety surveillance, pharmacovigilance and labeling teams, experienced generic drug consulting firms, such as PDG, can be highly beneficial effectively navigating and implementing these changes.

If finalized, “the proposed rule would also amend the regulations to allow submission of a CBE-0 labeling supplement for certain changes to the Highlights of Prescribing Information for drug products, with labeling in the Physician Labeling Rule (PLR) format. This is intended to remove an unnecessary impediment to prompt communication of the most important safety-related labeling changes (e.g.; boxed warnings and contraindications) for drug products with labeling in the PLR format.”[9]

The dark cloud – according to GPhA
As noted above, it has been suggested that the FDA does not have the legal authority to finalize the rule as proposed. In response, FDA claims authority to regulate drug labeling as provided in 21 U.S.C. 301. The president of GPhA, Ralph Neas, holds the position that FDA’s proposed rule contradicts “clear statutory language” and “exceeds FDA’s statutory authority”. If finalized, GPhA may bring suit challenging the legality of the proposed rule in court.[10]

PDG will keep you informed
With July quickly approaching, it is anyone’s guess as to what the final rule will look like. Regardless of the outcome, the saga may still have more chapters left before it plays out. The experienced generic drug consultants at PDG will continue to monitor events relating to the Generic CBE (or EAR) Rule and keep you updated.

PDG Regulatory Expert is Vice-President of Operations and Business Development for PDG, a global pharmaceutical and medical device consultant with extensive experience in the strategic development of drug products and medical devices. Please feel free to contact us for more information.

The opinions and statements in this paper are solely those of PDG Regulatory Expert and do not necessarily reflect those of PDG.

Regulatory Consulting- the Missing Piece to Your Puzzle